UPDATE: I’ve made a couple of changes to the script to make it easier to use and there’s now a demo available. 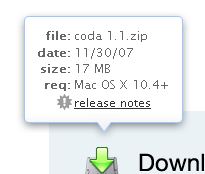 A few weeks back I was looking for a nice simple way of adding tooltips to some buttons on a site – sometimes an image alone doesn’t quite convey what the button does in enough detail.

I found the excellent coda popup bubbles on jQuery for designers, this seemed to do everything I wanted it to, but it meant going through all of my html and adding an additional div with the popup content. That’s fine for me, but other developers are never going to remember to do this and we really want a consistent user interface.

A little bit more looking led to Web Designer Wall (#5 in the list). They have a very simple technique that

pulls the Title text from an image and creates the popup out of this. All of dev’s are told to add title text to images so this was almost perfect. I say almost perfect because unlike the code bubbles the hover events queue up. This means that if you run you cursor back and forth over the buttons the popups keep firing for a few seconds/minutes after you stop.

So my final stop was to combine the two. I also incorporated any fixes I saw in the comments

section of jQuery for Designers.

Or see a demo here.

The image file I use for the tooltips can be downloaded here, and is free for anyone to use.